The story is the story of Jong-Soo (Yoo Ah-In), a writing apprentice who does little things and who crosses paths with Hae-Mi (Jun Jong-seo), a childhood friend. A romantic relationship will quickly be created between them, but it will just as quickly be parasitized by the arrival of Ben (Steven Yeun), a new friend that Hae-Mi met abroad. And whilea strange love triangle begins to form, Hae-Mi mysteriously disappears …

That is when the romance that burning has installed radical twists against the thriller. The sparse comfort zone that Lee Chang-Dong and his co-author, Oh Jung-mi, offered viewers, gives way to an investigation in which Jong-Soo sets out to find the young woman.

Has a love triangle gone wrong?

But if the various studies of the character – including a minimalist but frightening spinning sequence – really remind us that we’ve switched to the genre, this quest also seems infected with a latent tensionan inevitable, captivating and stimulating mystery, as destabilizing as the unfulfilled romance at the beginning of the film.

This strangeness is felt in the photograph of Hong Kyung-Pyo and in the direction of Lee Chang-Dong. Their way of filming the twilight, which almost makes the film lean towards the fantastic side, the aerial shots, the rather short focal lengths that give width to the picture, all coupled with the minimalist music from Mowg: the film’s atmospheric ice is because of it muted elegance of its production, which reveals the mysterious gaps in a reality that has become intangible. 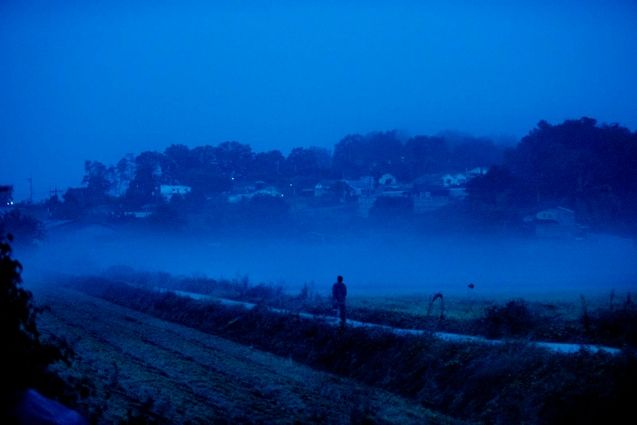 A disturbing world and a mysterious one.

burning talking only about it: gaping gaps in our perception of the world. It emerges from a scenario filled with abandoned tracks, half-explored paths and unanswered questions. Is Ben really burning greenhouses? Is there a Hae-Mis cat? And what about the well of his childhood? And obviously: what has become of the young woman?

So many questions left deliberately unanswered, not by laziness or superficial desire to frustrate the viewer, but rather as a sincere desire to give content to this idea of ​​a deficient and elusive reality. Lee Chang-Dong’s feature film becomes a haunted source of reflection, but also of one dizzying treatise on the mystery of the world and its relation to the invisible. 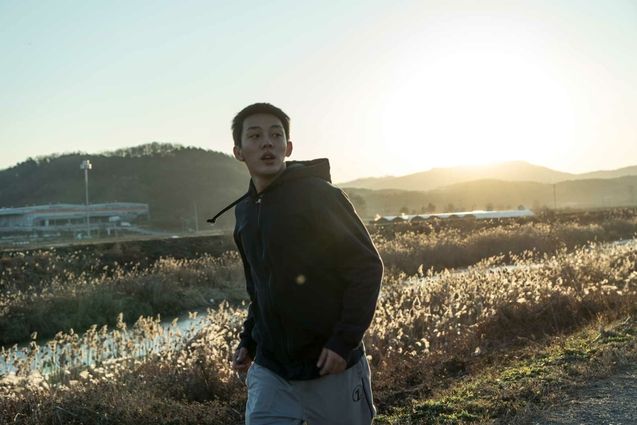 The filmmaker is passionate about felted or opaque surfaces. The light dimmed by a tarp, the cigarette smoke spreading, a clearing against the wall in a young woman’s room: Lee Chang-Dong is as interested in the visible as in the barely noticeable, even the invisible.. It also testifies to the whole lexical field that the film broadcasts on the subject.

Between Hae-Mi’s pantomimes, North Korea’s speakers call out to Jong-Soos’ father’s house on the other side of the border – who therefore hears but does not see the other part of the country – or all the various anonymous calls that Jong-Soo receives and which only provides space for a deafening silence on the other side of the cord: burning focuses on waves of the unreal to the tangible and the rational. Dthe moments when reality is no longer enough.

But the film is never disconnected from the world, it is also its whole genius: to succeed pull from the cracks of reality to comment on the contemporary. 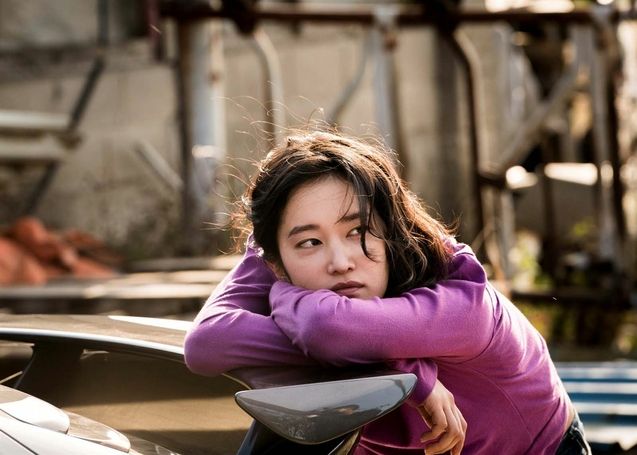 This world which, as Jong-Soo himself says, “remains a mystery” for the characters, then testifies to the problems that cross questions and fears in some South Korean youth from the late 2010s. This funny character, who is Ben, is also a beautiful manifestation of this.

In fact, the film will never confirm whether Ben is really burning greenhouses, whether he made Hae-Mi disappear, and will not give more details about his relationship with the young woman he finds out at the end of the film. . He is simply defined as an attractive playboy, a Gatsby – as he is directly named in the film – which is shrouded in mystery (where does his wealth come from? what is his profession?), but stays relatively warm and friendly. 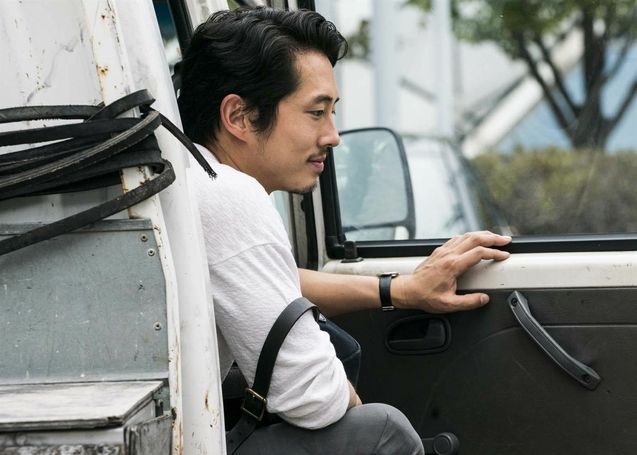 A new kind of antagonist?

But distrust of the camera combined with the ambivalence of Steven Yeun’s acting clearly indicates to the viewer the negative character of the character. This double movement of an antagonist written as a positive character, in addition to adding ambiguity to the film, installs the obvious figure of a new type of evil, a vacant, charming 2.0 monster who drives a Porsche, dresses well and takes care of himself. A kind of Patrick Bateman in short, but if antipathy and murderous madness would be hidden from the spectators.

When Ben talks to Jong-Soo about the fires he causes, uncertainty arises about the true nature of the information: how far is this man who thinks he is a god capable of going, and could it be that these greenhouses are actually humans? This doubt therefore allows it burning to play brilliantly with the mind of the spectator, but also to explore a tension generated by the inequalities that divide South Korea. 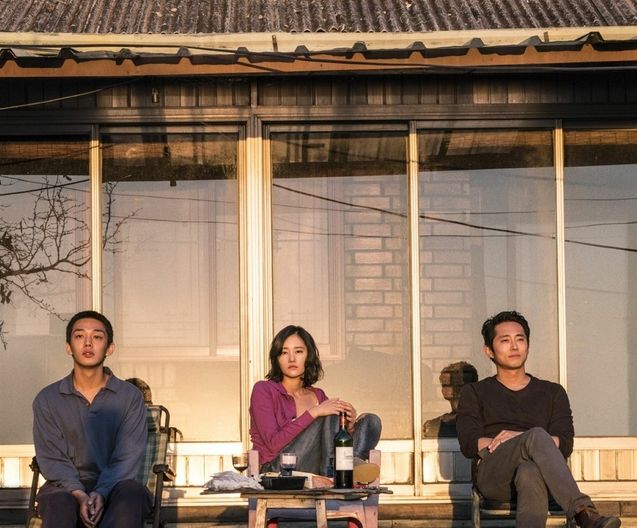 Portrait of a South Korean youth.

Take effect, Ben’s comfort of life contrasts with the precariousness of the farmers and Jong-Soos’ daily life. During the sequence where the latter goes to a cold and dehumanized job interview in a warehouse. In another, we learn that it is not the sun’s rays that illuminate Hae-Mi’s studio, but their reflections that hit the large glass towers in the offices in the city center. Thus, whether through concrete and trivial elements, as much as through metaphorical and evocative ideas, burning reveals the daily violence that this duo of protagonists is subjected to without landmarks or roots.

Whether it’s Hae-Mi’s mysterious childhood or Jong-Soos’ unstable parents, our heroes are left in a world they do not understand. Everyone seeks answers to their questions: through spirituality for the young woman and through inquiry for the young man. For one, then for the other, however, it is only once confronted with the emptiness of life thatonly one solution will impose on a burning youth’s burning eyes: to be consumed. 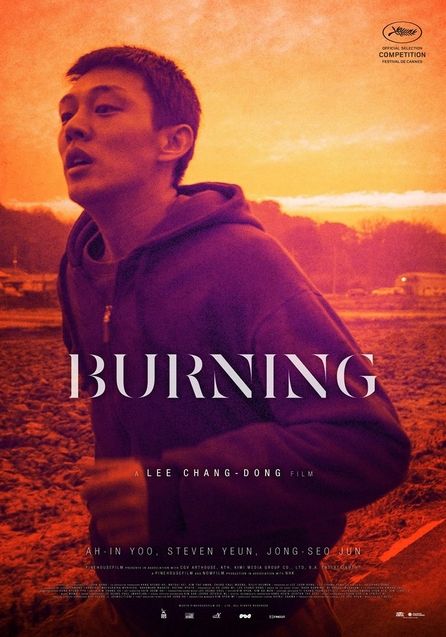