When they decided to flee Ukraine, Viktoria Saidam and her husband had to decide: to travel, but where? Their choice quickly fell on his homeland, the Gaza Strip.

Originally from the city of Vinnytsia, about 200 km southwest of Kiev, Viktoria, 21, was studying pharmacy in the Ukrainian capital when she met Ibrahim Saidam, 23, from Bureij, a refugee camp from Gaza, and a medical student.

Faced with the advance of Russian forces following the invasion ordered by President Vladimir Putin on February 24, the young couple, who had been married for two years, decided to leave Kiev and return to Vinnytsia, then pack up at the end of February to flee Ukraine. like millions of others.

Receive our free daily edition via email so you do not miss any of the best news. Free registration!

“We understood that we would not know what tomorrow would bring. Every day the number of dead and wounded increased,” says the chubby young woman, born Viktoria Breij.

Nine people were killed in the bombing of Vinnytsia airport by the Russian army on March 7, according to Ukrainian emergency aid.

“My husband and I had to look for a safer place than Ukraine, we chose his homeland, Gaza,” said the young woman, who collapsed in tears as she watched videos on her phone of buildings powdered by Russian strikes .

They left by minibus and then on foot to Romania. From there, they flew to Cairo and then crossed the Rafah crossing point between Egypt and the Gaza Strip.

Viktoria says she knows the “reality” of this Palestinian micro-territory, controlled by the Hamas terrorist group and subject to Israeli and Egyptian restrictions for more than 15 years.

Unemployment is over 50%, electricity supply is sporadic and conflicts can break out at any time.

Hamas, considered a terrorist group by much of the West, has fought four wars with Israel since seizing power in Gaza.

In the latest conflict, in May last year, Palestinian armed groups fired thousands of rockets into Israel, which responded with intense airstrikes.

“There was a war here (last year) and it may start again, but when we were forced to leave Ukraine, (the Gaza Strip) was safe,” the young woman told AFP. 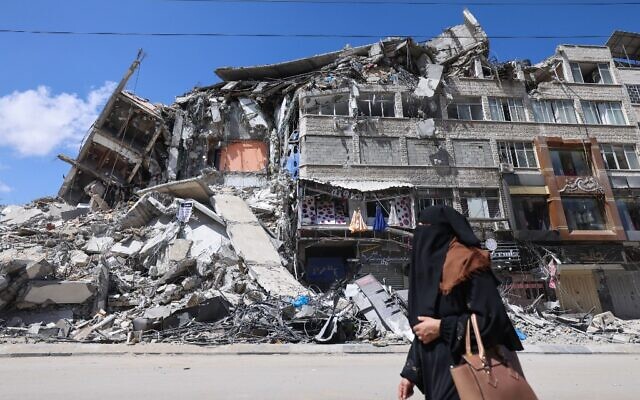 A Palestinian woman walks past a destroyed building in the al-Rimal commercial district of Gaza City following an Israeli attack following the ceasefire between Israel and Palestinian terrorist groups. (Credit: Emmanuel Dunand / AFP)

“We do not know what will happen tomorrow, we hope and pray for the best,” adds Viktoriia, who converted to Islam shortly after her marriage and speaks only a few words of Arabic.

About 2,500 Ukrainians are in Gaza, according to the Ukrainian diplomatic mission in Ramallah in the West Bank. It is often women who have married Palestinians who have studied in Ukraine.

“I went through three wars in the Gaza Strip, which gave me some experience,” says Ibrahim Saidam, impeccably groomed and fluent in Ukrainian.

“A week before the start of the war (in Ukraine), I had prepared provisions. But we did not expect it to be so violent,” he told AFP.

“We could have gone to European countries to seek asylum, but I preferred to return to Gaza because I feel safe here and I know the customs. »

Viktoria had long wanted to meet her in-laws, but had not imagined doing so under these circumstances.

Today installed in the family home, where she is feeling well, however, she says she can not “describe all the feelings of fear and panic” that she feels when talking to her sister and brother who have stayed in Ukraine .

“I still can not believe that what happened was not a dream, it’s awful,” she breathes, “I dream of the day my husband and I return home.”

You are one of our faithful readers!

That’s what we work for every day: to give discerning readers like you relevant media coverage of Israel, the Middle East, and the Jewish world. Unlike many other stores, our content is available for free – without a payment wall appearing from the first paragraph. But our work is becoming increasingly expensive. Therefore, we invite readers who can and for whom The times of Israel in French it has become important to support us by joining The community of The times of Israel in French. For an amount of your choice, once a month or once a year, you can also contribute to this independent quality journalism and enjoy ad-free reading.