They are named Arielle, Delphine, Matthieu, Jean-François, Manon, Antoine or Grégory and are part of the 120 animal keepers at Beauval’s Zoo. Their job? To care for, monitor, feed, feed, educate, study, accompany, de-stress, feed, educate and care for the approximately 35,000 animals in Beauval’s Zoo, from the smallest dendrobat seed and its showy colors to the largest mammals, but also maintain their habitat . The same profession, learned in school or at work, the same passion, but different facets.

“A real relationship can be established with the birds”

Antoine, his stuff is birds. Assigned to the nursery, he takes the little birds under his wings, feeds them, accompanies them. Place the eggs that have fallen from the nest in an incubator, monitor the temperature daily, and then feed the newly hatched chicks. “Hooked beaks – parrots, parakeets … – we feed them with a probe, directly in the crop. Birds of prey and carnivores, directly with the seaweed, for impregnation, so they get used to humans”, like night birds, when they participate in the zoo’s bird show “On the other hand, grab no. You do not have to get used to them. We put the food in a bowl and we go.”

Weighed three times a day, the chickens, which eat 10% of their weight, pass through different spaces during their development. First in a breeder, then under a lamp, then outside during the day and back at night and finally in one of the zoo’s four huge bird greenhouses.

The salad, the hippopotamus’ candy

About his companions, Antoine knows almost everything. How to scratch the head of a caracara “to calm it down”. How to detect the irritation of a Siberian eagle owl by a simple snap with its beak. “A real relationship can be established with the birds,” he says.

An analysis shared by Arielle. And yet his daily companions are of a completely different nature. Assigned to the savannah, she rubs herself with hippos, giraffes, wildebeest, zebras and rhinos. For her, there is no more “sweet and intelligent” than these. “In captivity at least!”

We get them used to it without forcing them to come and visit us, check their teeth, their paws, weigh them

“And they recognize the coaches really well,” explains the one, who is also a qualified diver, as are five other coaches among the ten who take care of herbivores. A necessary technical know-how, especially to clean the hippopotamus pool and … by the way, recycle phones, sticks or other umbrellas that clumsy visitors fall into. 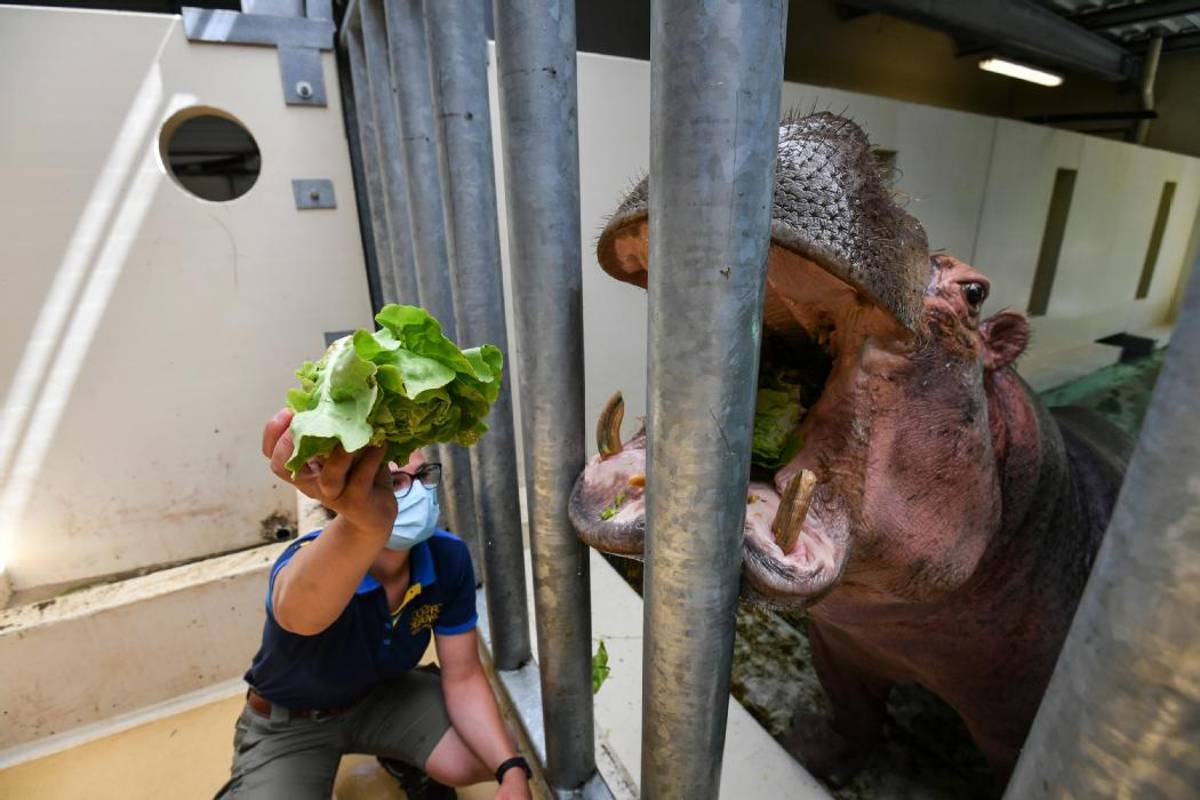 Establishing a relationship of trust with the animals, especially to facilitate their care, is therefore an integral part of the caretaker’s work, in addition to the feed part. “We get them used to it without forcing them to come to us, check their teeth, their paws, weigh them,” Arielle explains. And to match the plot with the word by calling Bolinhas the hippopotamus’ mother and Gloria, her little girl. As without being asked, the caller also answers the lure of the promise of the sweets that the salads represent to them, given by hand and consumed without firing a shot.

Blood test on a rhinoceros

This relational technique called medical training allows trainers to support veterinarians when the latter has an intervention on an animal. That morning, in the crates next to the four-acre savannah, a female rhino had to undergo a blood test “to see if she was pregnant,” explains Matthieu, vice president of savannah animals. The mastodon moves slowly and calmly towards the crush. Y goes in alone, attracted by the promise of some delicacy, between hay and pellets. Relieved by the voice of a healer, he lets his ear rinse with warm water, to dilate the vein into which a veterinarian will come to take the blood. Once done, the pachyderm comes out by moving backwards, slowly. Only. Calm. 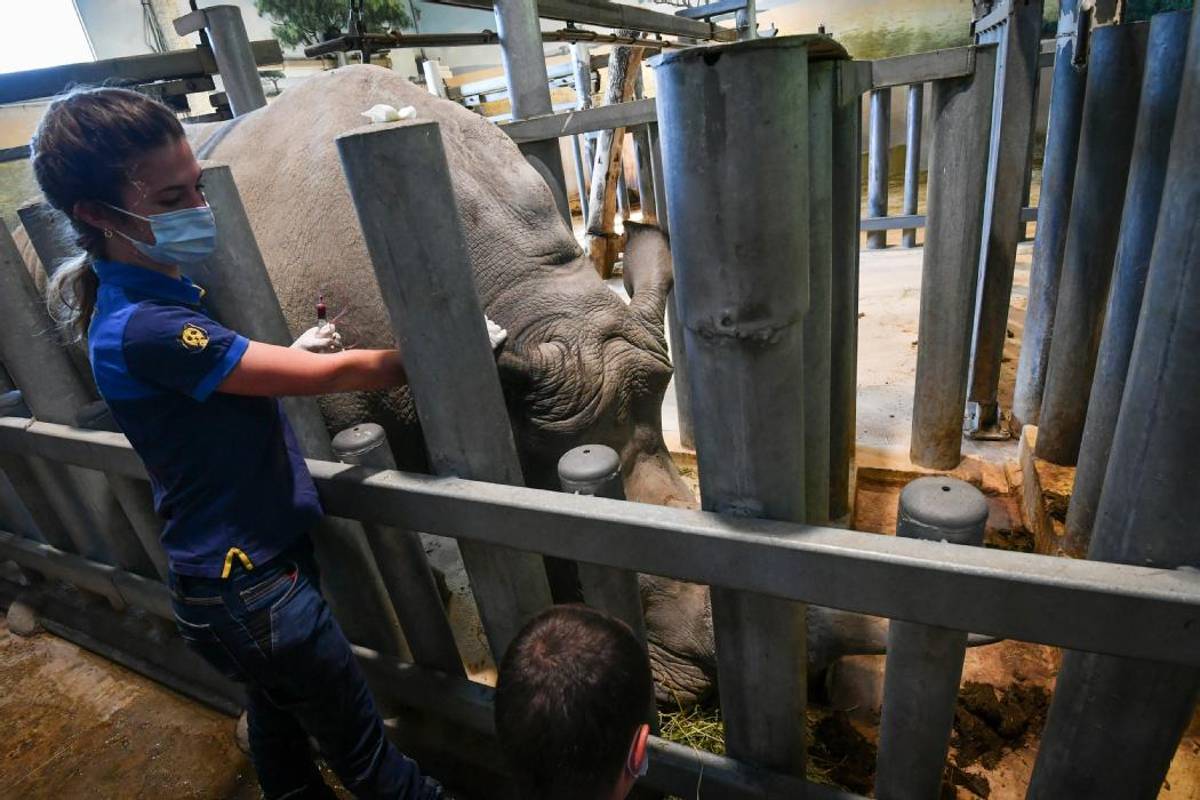 “It’s a long process. It takes a year of training and relationships to get this volunteer work. Animals are more or less suitable for it, depending on their character and their ability to concentrate. And as long as a step in the process is not achieved, we do not move on to the next “, explains Matthieu, son of a farmer who has always rubbed shoulders with herbivores. He just went from cows, horses and sheep to wildebeest, zebras, giraffes … which he considers” more honest “than the primates, him whom Beauval had offered to take care of the gorillas, and who had refused.” Monkeys do not appeal to me. “

“Great apes have all the good sides of humans, but they are not evil for free”

The apes are very close to us. They have all the good sides of people but are not ugly for nothing. We have many vain things, they are simple.

Quite the opposite of Manon. She is a primate specialist who has worked in other parks and she is one of the few gorilla passers-by in France. “I am passionate about all animals, but I am attracted to monkeys because of the feeling you can have with them. The apes are very close to us. They have all the good sides of people but are not ugly for nothing. We have many vain things, they are simple. And it is this feeling with two female gorillas that led Manon to Gabon, to accompany them during their reintroduction into their natural environment. “To avoid too much stress, we needed someone close to them. »

“Reintroduction is the culmination of the teaching profession. For before they had to be educated. “We try to preserve their instincts, their behavior, by hiding their food, by forcing them to find it, seven times a day. And when possible, we release them. There they knew how to climb, make gear, make nests, find food … Our job is to make sure that an animal in captivity is not lost when it is reintroduced. “