So much for love : from idyll to manipulation

Sophie grew up in the provinces, surrounded by rivers, where she fished for crayfish with her hands. At a party, she meets Marcus. Quickly, she falls in love with him. The man, a renowned comedian living in Paris, makes him understand that this love is mutual at first sight. In the beginning, he behaves like a perfect lover. Together they spend wonderful times. The charm works. The witch, Sophie, who nonetheless mistrusted amorous passion, radically changes her life to please him. She even comes to move, to change region, to be closer to him. But Marcus will very quickly show her dark side, a manipulator that makes her psychologically upset. When she dares to confront him with his lies and disagreements, he becomes verbally violent and humiliating. The irrational, even hallucinatory, reactions of her companion lead Sophie to guilt and then to depression.

So much for love: survive a toxic relationship 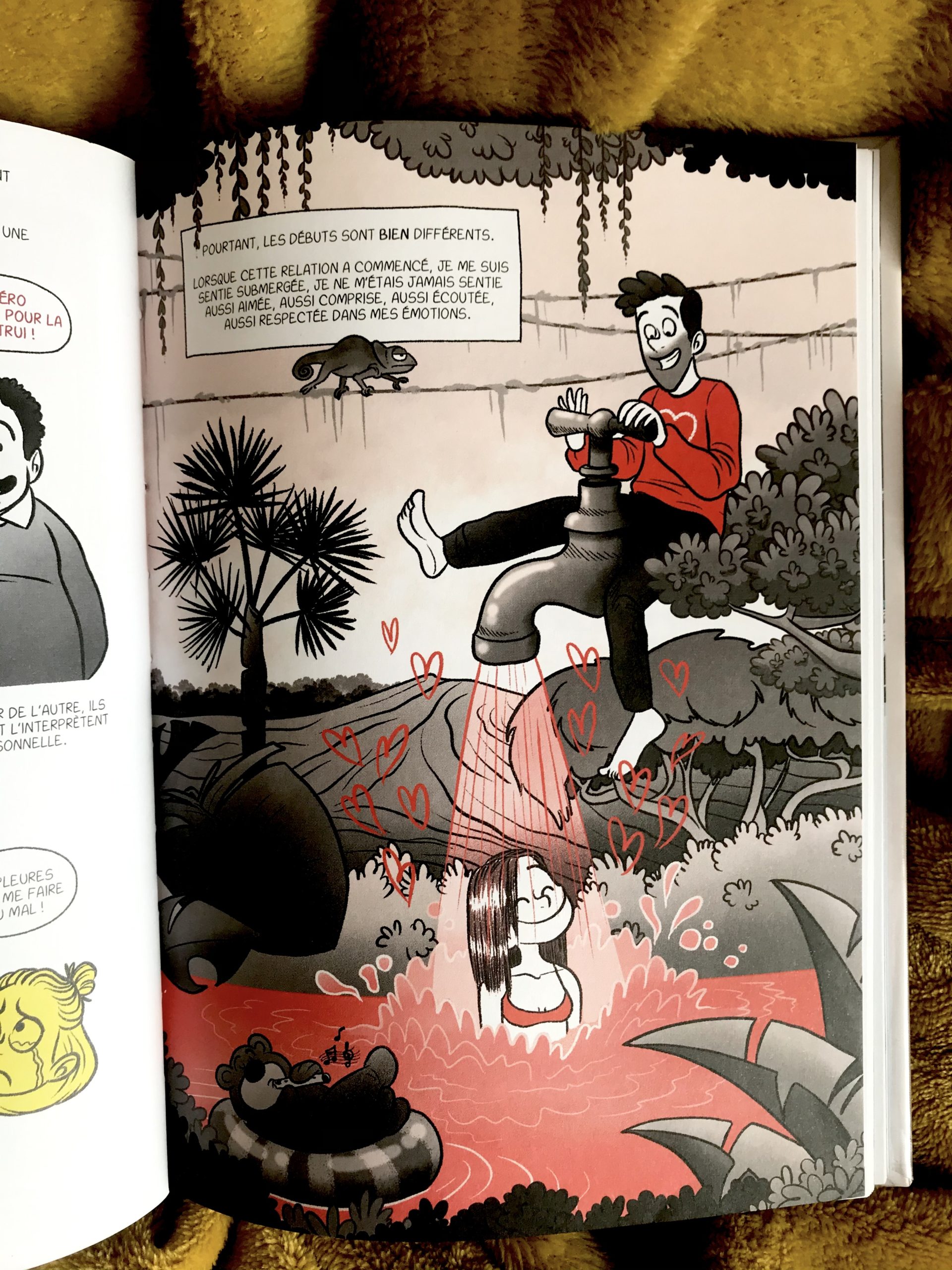 This graphic novel tells a true story. It was experienced by the book’s illustrator and narrator. Told with a lot of humor, we immerse ourselves in it as in a Tintin. Especially when Sophie Lambda had the brilliant idea to introduce her Chocolat bear, a greedy cuddly toy who is happy to indulge in a few vices, including drunkenness. Spiritual, comical and full of appropriate, Chocolat does not lack wisdom as he plays the role of guardian angel or voice of conscience. Although instructive, “Too bad for love” is an entertaining and fun cartoon.

The author points out that she was content to tell what happened to her during a romantic relationship. The perverted person is therefore a white heterosexual man, and the one caught is a white heterosexual woman. However, she clarifies that the manipulators can be of all ages, come from all backgrounds and all cultures. That it pertains to all genders and all sexual preferences. That manipulators meet everywhere, even in “friendly” relationships, among our work colleagues or in the family. In order not to lock toxic people into a single box, the term manipulator is used for these three scenarios: the narcissistic pervert, the psychic vampire, or the sociopath. 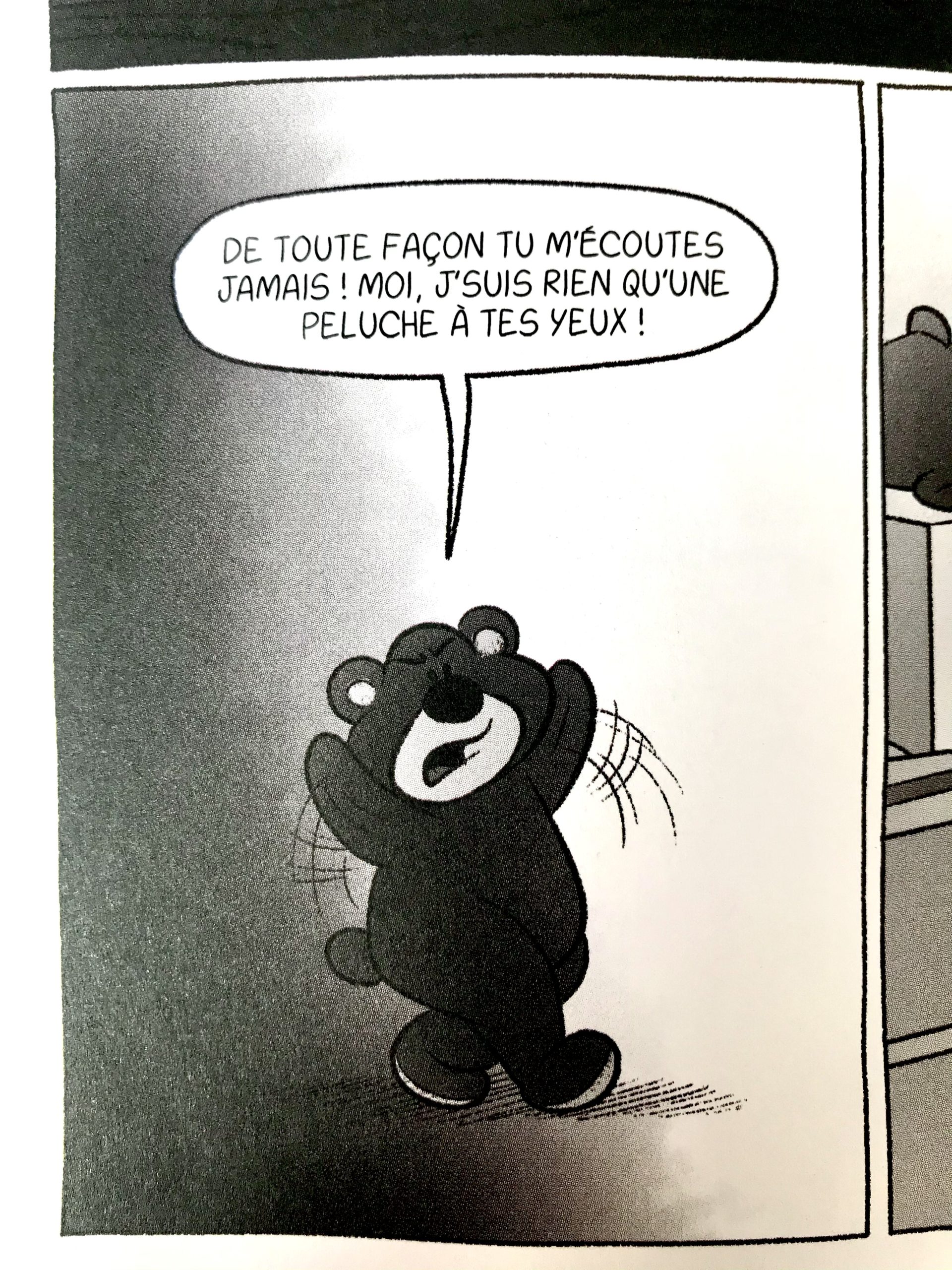 A passage from the cartoon appealed to me in particular: when Sophie explains that saving your life and mental health should not be confused with cowardice or ghost. Running away, disappearing by blocking the toxic person from all sides, is the only solution to escape the manipulators. “To be a coward is to disappear without giving any news to anyone who has never harmed us. To leave an executioner is to save his skin. Cowardice is a violent lack of respect performed in the greatest silence.” On the other hand, acting it about running away from a manipulator or a toxic person about respecting yourself.Note: manipulators are extremely good at playing victims of ghosts with their friends or on social networks.

Learn to recognize a manipulator and respond

Sophie’s story is divided into several parts. The first shows us how the young woman allows herself to be insidiously manipulated by Marcus until the day she realizes she’s in a destructive relationship.

In the second part, she leaves him. Totally destabilized by these few months of toxic conditions, she asks for help from a professional to rebuild herself.

In the third part, she dismantles the traps that bind the hunter to his prey. Sophie Lambda spares no one. Not even the manipulated one who often imagines he is stronger than he really is. 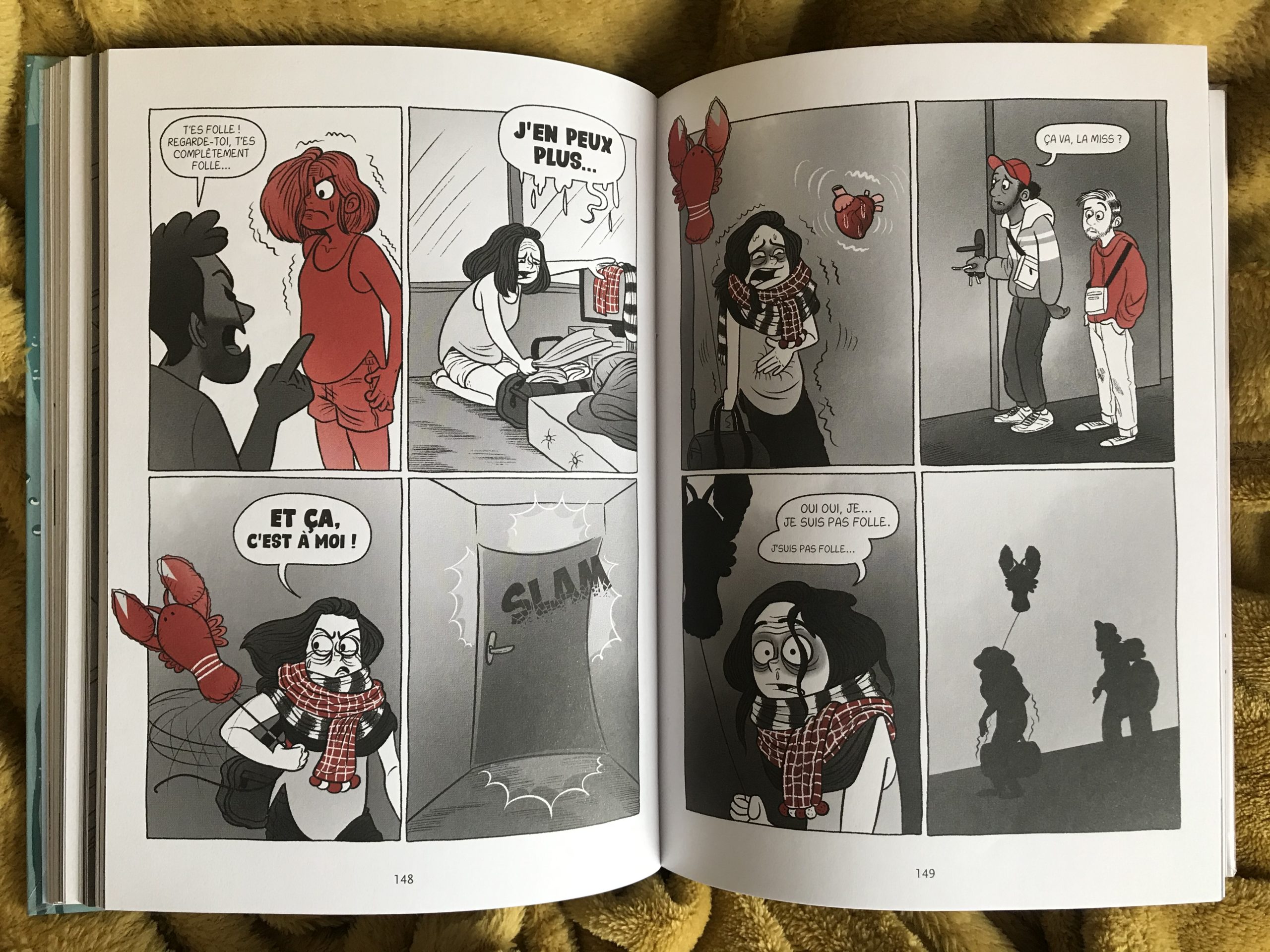 At the end of the book there is one Violentometer. This tool allows anyone to measure the violence another person is exposing them to. This is followed by four pages with addresses and telephone numbers where victims of physical or psychological violence can find help or assistance. They are all located in France. But if you live in Switzerland and you are a victim of violence, search the internet with the following words: violence psychological ( Where physical ) with the name of your canton or city, you will quickly be directed to an association near you.

Good to know: if you want to test Violentometer without buying the book, it is easy to find online. Created in Latin America so that women can measure the violence they experience and understand when they are in danger Violentometer can easily be used by men.

“Too Bad for Love” is a graphic novel that I would not hesitate to put in the hands of any teenager and lots of adults. 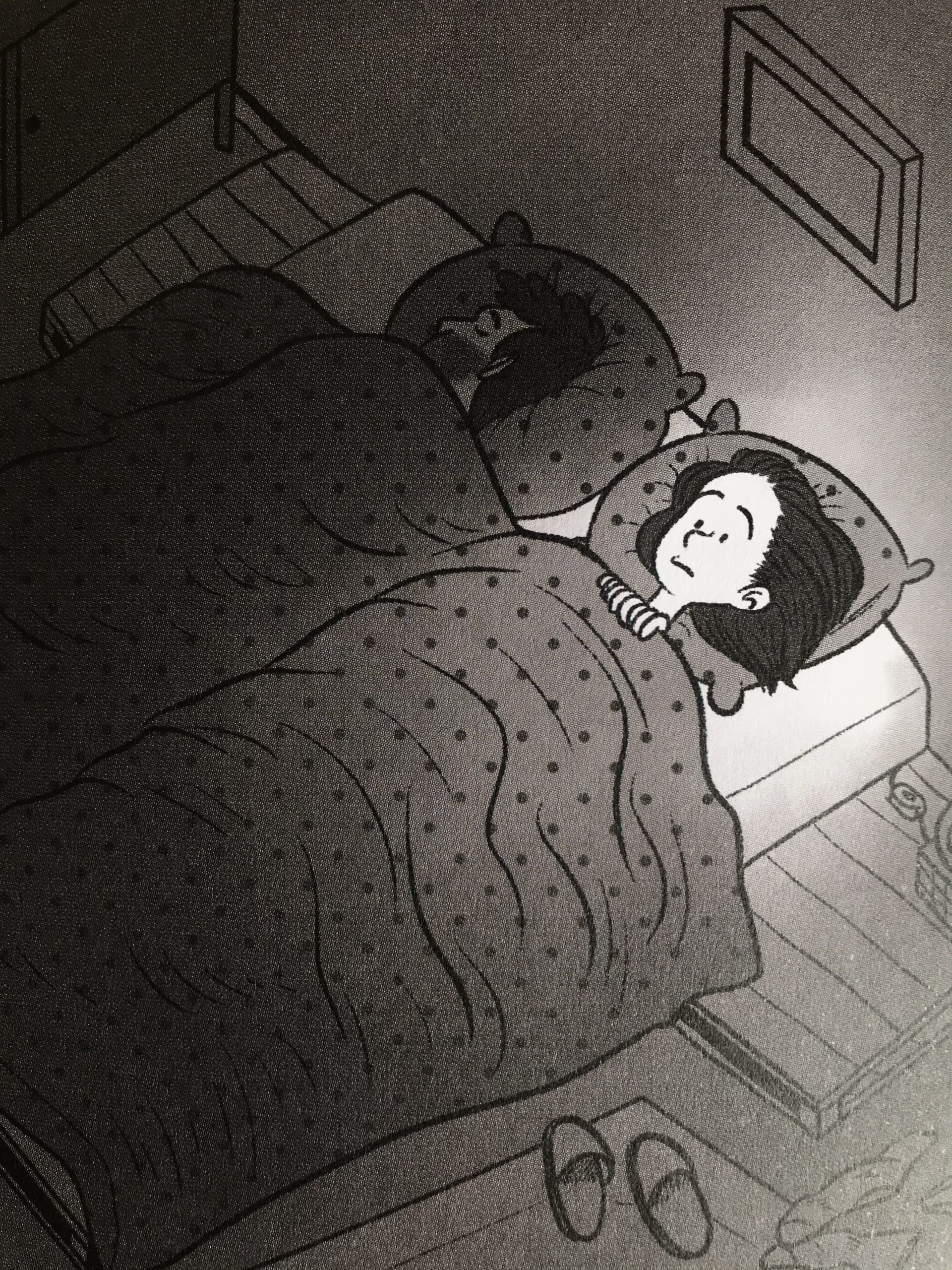 Self-taught illustrator, she was born in 1986 in Besançon, Franche-Comté. She grew up in Vesoul, which she left as a 19-year-old, after stopping her studies to gather various work experiences for three years: au pair in Ireland, butcher at Super U, working in a factory in Switzerland, grape picker, waitress or cashier. She resumed a university course at Montbéliard and completed five years of study in foreign languages ​​used for e-commerce. It was alongside her studies that in 2010 she created her pseudonym Sophie Lambda and opened a comic book blog. She tells her anecdotes about travel, students and small snippets of life. The blog and social networks helped, she got her first illustrator contracts while she was still a student. In 2014, she completed her master 2 and started full-time, freelance, in illustration. Since then, she has worked in publishing, advertising and communication. 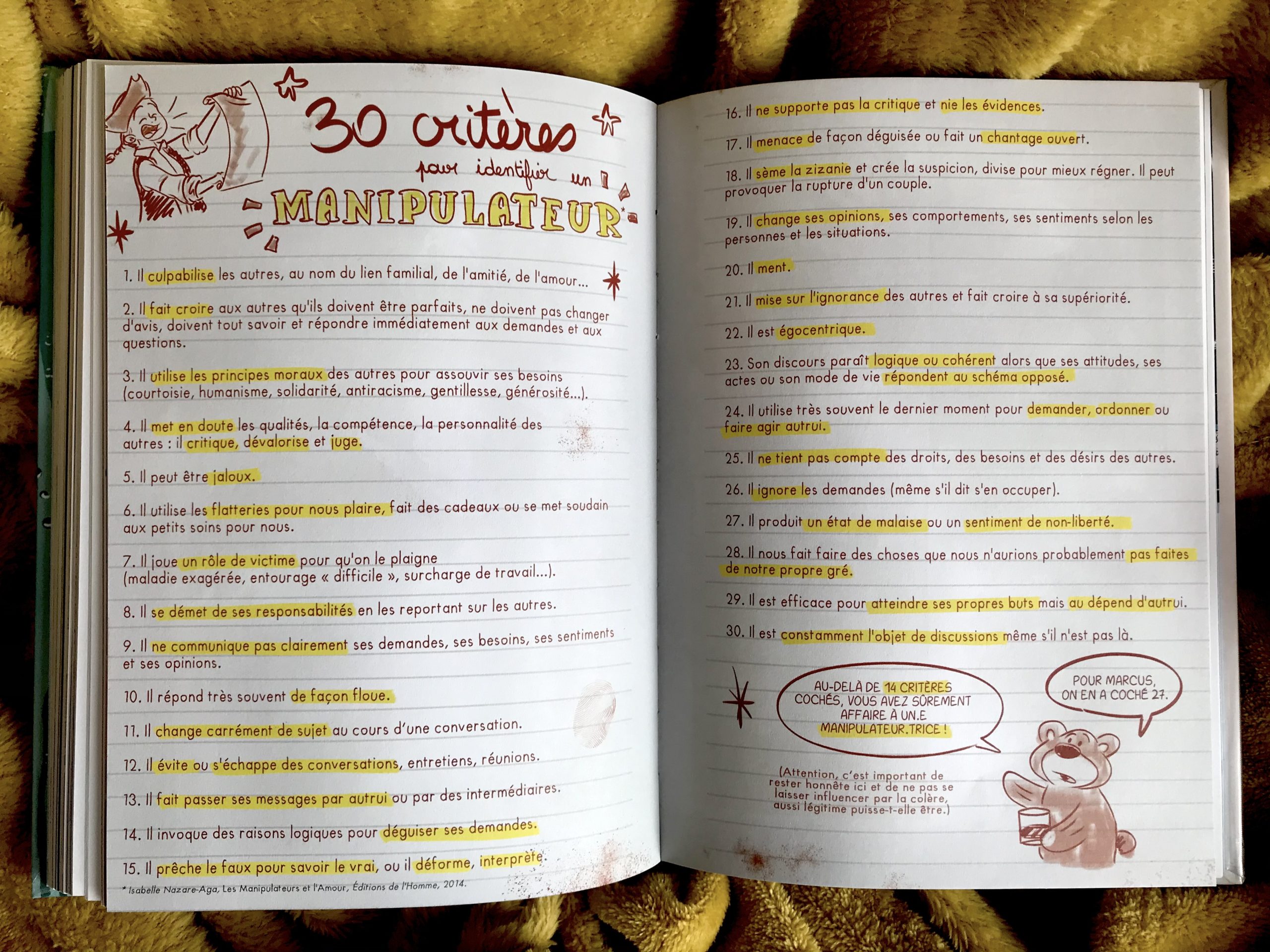