Isolated in the depths of Creuse, Troy Von Balthazar still continues to amaze us with the sweetness of the tunes in his intimate pop. His sixth album, Against my love!constantly looking for the beautiful, we went to interview him to find out a little more about his new baby and see how the prince of “sadcore” prepares for the future.

Hi Troy, How did you survive the health crisis and your lockdowns for 1 and a half years?
I took the time to finish my new album and start the next one. It was a difficult and strange time for all of us, and it was hard to see my friends suffering both from the fear that this crisis brings and the disease that this virus causes. I received two vaccines so I try to be smart and careful with this virus. We have so far been fortunate not to experience a major war in this region in our lifetime, but this virus is similar in some ways. I hope that this moment of madness will soon pass and that in a few years it will just be a strange memory.

This new album was released in August and is called Against my love!. Why did you use the French language to identify it?
I have lived in France for a few years after spending more than 6 years in Berlin. At the end of my stay in Berlin, I was really tired of people and life in general, so I moved to Creuse to be away from it all. There I spend my time with the cows and the trees. I spent a few years alone, it was important for me to have time to reflect, to take a few days to really ask myself the right questions and to have time to answer them without changing my thoughts. It was good to try this, it made me a happier person. It’s a real pleasure to be back in France, most of my friends are here. I think the culture here is like small waves in a lake, there is a certain fluidity in French culture that is soft and natural. It’s nice to live like this.

Who is “my love” addressed to in this title?
Oh, it’s an exclamation that is generally expressed, it’s an expression you use to try to give courage in a difficult moment, like a thought you could say to someone you know. In this special time, we should all be saying that.

Can you tell us about “The Outside World”, a title which is also in French? Is it related to the pandemic?
This text was written before the pandemic. It’s taken from my book Guarantee! Poison snake! No access!. I would like to speak French on this album because it is important for me to get closer to this language. For many years I did not want to be logged in, I would somehow block most of what people said. I used to love freedom and silence, but now I feel a little different. I want to talk to my friends in French, join them for the party. We can all change.

This record is definitely more intimate than your previous ones, I have the impression that you used piano and synths a lot more. What approach did you take to composing this disc? How long did it take?
I recorded this disc all alone in Creuse, in a small house. My work process is simple: I wake up in the morning and think of the song from the night before. The rest of the day I take time on the piano, guitar or other instrument to find the best way to express it. I record this music the same day while it is still fresh. It’s like an amoeba at this point, formless. The next day I look for lyrics in my books or write new words that fit the music. My song is recorded at once, and the recording takes place at the same time as I write. I became very attached to this way of making music. It is closer to painting in many ways. It would not work in a large studio because it would take too long, but alone in the countryside with all my guitars around me, it’s great. Every night I go to bed happy, and the next morning I continue …

Where did you get your inspiration for this record?
You know, I’m a very simple person in life. This is how I would describe myself. I do not want anything other than what I have now, everything inspires me here.

The childlike drawing on the cover also gives this feeling of being part of your intimacy. Why this choice? What message did you want to convey through this drawing?
Painting is a personal moment that I once experienced. A special moment that I experienced with the eyes of a child. Just a millisecond that was extra colorful in my mind. There is a harmony in the imperfection of memory. I gave this painting to a special person in my life and saw it again recently while thinking of an idea for a scrapbook. I felt a connection with this painting as it happens with a new song that we compose. So I decided to make it the cover of the album. I said to my friend: “She will be worth a million euros when I die”. She disagreed … until now. 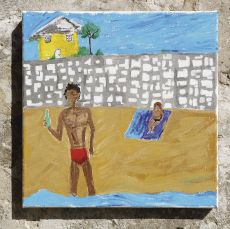 You seem to pay close attention to the lyrics of your songs, especially as the compositions sublimate them. Do you feel a need to transmit your lyrics to the public, just as strongly as your music?
The lyrics are just as important as the music. In my opinion, there is so much more imagination in the lyrics, so much to examine and express, externally and internally. I like to take my time and try to make my lyrics strong, hoping that I sometimes manage to do it.

Are you planning to publish a new collection of poems?
No, but I’m still writing.

Did you participate directly or indirectly in the creation of the clip for “What I Like (About Me)? Can you tell us about it?
No, I did not participate in the writing or making of this clip. It was a director from Los Angeles, Joey Alvarado, who did it, a super nice guy. He liked the song and I gave him full confidence. I discovered the clip the day it was uploaded.

On the previous record, the release party was over Elias Dris. Is it something you would like to do again in connection with a tour, to invite someone?
Of course ! Everyone is welcome on stage when I perform in front of an audience. Sometimes I feel lonely on stage, so I’m always happy when someone comes up and sings with me.

Speaking of guest, I wanted to know if you had heard from Adeline Fargier and if you have ever thought about playing with her again, because I thought your duo was very complementary and quite magical.
I would love to play with Adeline again. She plays guitar with cat power for more than 5 years during his world tours. I saw them play in Berlin, it was amazing. Adeline is an extraordinary musician with a real musical style. You can train for years to become a good musician, but you can not to have a natural style. She obviously has it in her game.

End of 2020, vicious circle republished A taste too bittera great album from the indies scene in the late nineties, are you ready to go back on stage to celebrate this re-release?
I was very happy about that vicious circle re-release this album which was very special to me. Philippe Couderc, the brand’s founder, was a fan of Chokebore and was a huge support for the release of the album. He died recently, I miss him. One day we would like to do concerts again with Chokeborebut the future is uncertain and the end is always near.

What are your plans for the coming months and years? Is a tour planned to defend this new record? Or is the current complicated situation something that prevents you from projecting yourself?
My wish for the next few years is to make better albums. I also like to mix other artists’ music, it’s something I do a lot at the moment because I love this phase of musical creation. Right now I’m recording my next album. I want to make music for as long as I can before I run out of inspiration or energy. Before then, I want to write something really beautiful. I approached it several times, but I never reached this music that I hear in my dreams. Writing the music of my dreams is my plan.

Could you end this interview with your favorite quote?
“I can not even remember what day it is, so how could I remember a quote?” of Troy Von Balthazar !

Thanks to Troy and also to Guillaume and vicious circle.
Photo: © Camille Derian

Note : Comments belong to the person who posted them. We are not responsible.