The leader of the Belarusian opposition, Svetlana Tikhanovskaïa, passed through Geneva on Tuesday, and was a guest on RTS at 19.30. She calls for supporting Ukraine’s fight against the Russian invasion and for “exerting maximum pressure on the dictators”.

Svetlana Tikhanovskaya has been living in exile since the controversial presidential election in 2020 in Belarus, far from this country where her husband is still in prison. But she remains very closely informed about events on the ground, and especially since the Russian invasion of Ukraine.

Belarus, however, plays an ambiguous role in the conflict: It serves as a rear base for the Russian army, but its president does not want to commit his army on the ground (see box).

According to our information, the Belarusian army was to invade Ukraine last week.

For the opponent, it is in fact the soldiers who put their feet up against the wall. “According to our information, the Belarusian army was to invade Ukraine last week. But it does not want a war against the brothers in Ukraine,” she said.

There have been protests among the officers, who refuse to cross the Ukrainian border, adds Svetlana Tikhanovskaïa. “But no one knows what will happen if, under pressure from Putin, Lukashenko is forced to give this criminal order,” she said. “We ask our soldiers to surrender as hostages or join the Ukrainian army in order not to be held responsible for this crime,” the leader of the Belarusian opposition ordered.

The difference between Belarus and Ukraine is that in Ukraine they stand together against the invasion. 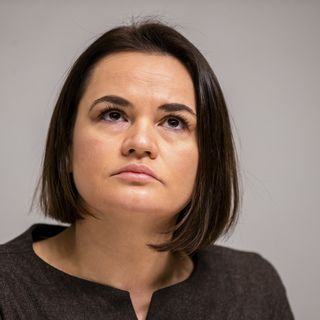 Asked about the real intentions of Vladimir Putin, and especially his supposed desire to recreate a kind of USSR with Belarus as a satellite state in Russia, Svetlana Tikhanovskaia notes that everything has changed since the fall of the Soviet Union.

“All the countries that have become independent want to remain that,” she stresses. “But the difference between Belarus and Ukraine is that in Ukraine they are united against the invasion. In Belarus, Lukashenko is one who cooperates [avec Moscou]”.

A radically different situation than a year ago

In an earlier interview with RTS a year ago, the Belarusian opponent said she did not necessarily want Minsk to turn its back on Moscow. But the situation was different then, she says.

At that time, “Belarusians wanted to maintain good relations both with Russia and with the West. Today, it is quite obvious that Lukashenko dragged our country into this war, but our people are against it. Today” Today, the attitude of Belarusians to the Kremlin are completely different. They may want to maintain a good relationship, but it is impossible now. “

Does Svetlana Tikhanovskaïa imagine that Belarus will turn to the EU in the future or even to NATO? “This question has never been asked of Belarusians,” she replies. “We should ask our people, but so far we are fighting against the regime. We must already solve the problem of the dictatorship in our country and then move on.”

I also believe that a no-fly zone should be introduced over Ukraine.

On the other hand, the opponent of the Minsk regime supports the Ukrainian president in his request to create a no-fly zone over Ukraine.

“I also think it should be introduced, because it is Belarus that is sending missiles to Ukraine (…) I understand NATO’s arguments about the risks of World War III, including nuclear power, but this rhetoric about fear, about intimidation is just that, “Today, everything must be done to help Ukraine, because this is not a war between Russia and Ukraine, it is a war between a dictatorship and a free world.”

We must prove that democracy has teeth, that it can react.

“Dictators are unpredictable and you never know what it will end up with,” notes Svetlana Tikhanovskaïa. “But according to some experts, Ukraine is not the end point,” she continues. And in the face of this prospect, she has her solution: “You have to prove that democracy has teeth, that it can react. Unfortunately, Russia is becoming a country cut off from the whole world by an iron curtain. For me, as Belarusians, it It’s super important to know which side my country will stand on. “

On a visit to international Geneva, she urges Switzerland and the UN “to put maximum pressure on dictators” and “protect people”. Svetlana Tikhanovskaïa also counts on the populations that are victims of their leaders’ choices and their economic consequences. The decision is also theirs, she notes. “Are they okay with tightening their belts? Or will they stand up to dictators? I believe that good will overcome evil.”

>> The full interview with Svetlana Tikhanovskaya: